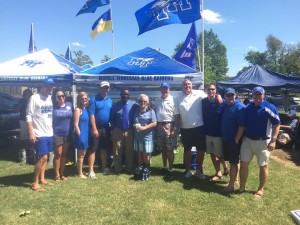 MTSU HOMECOMING INFO: Just a reminder we will not be having an official ΣΧ Stones River Alumni Chapter Friday night event this year. Many groups of Sigs are doing dinner and drinks on their own, so connect with the folks you want to see and find out what they are up to.

Homecoming Parade starts at 9:30 AM and goes down Main Street from Maney Ave. to Baird Ln. (no turn up Mid TN Blvd due to construction). Official MTSU Alumni Watch Party is on the President’s Lawn (across from The Boulevard Bar and Grille) so that’s where you’ll find most Sigs and their families during the parade. I’m told the parade this year leads off with the Band of Blue and should arrive at the Watch Party at roughly 9:45 AM and is expected to run just over an hour total.

ΣΧ SRAC’s Tailgate will be setup starting at 8:00 AM. Many of us will make the long trek down to the parade, but some will also be staying at the tailgate site (by the MTSU Outdoor Tennis Courts as always) and prepping lunch and watching football. Smoked meats and hotdogs will be provided by SRAC. Feel free to bring a dish or side if you like. Buffet burners will be on site to accept disposable aluminum half-pans if anyone cares to bring something hot to contribute to the fare. We’ll be opening the tailgate back up after the game to enjoy more time together and watch the evening college football games.

MTSU vs WKU starts at 1:30 PM. We encourage everyone to attend the game and cheer on our #MTSU Blue Raiders! If you still need a ticket to the game they will be available for purchase at the gate. It should be a great game, and you’ll be able to celebrate with friends and catch the end of “that other game” back at the SRAC Tailgate after Middle Tennessee is finished destroying Western.

See you there. In Hoc.